Cooler temperatures and shorter days can mean only one thing – ski season is right around the corner. For all of you winter sports enthusiasts, you’ve got a huge task ahead of you – choosing which slopes to shred this season. If you’re among those who already have firm plans in place, we wish you well! If you’re still undecided, let’s take a brief look at what Jackson Hole can offer that others, including Aspen, Park City, and Snowbird, don’t.

Here are 5 Reasons to Ski Jackson Hole This Season

Call us biased, but we believe Jackson Hole is the premier ski and snowboard destination for a multitude of reasons. Many of which are illuminated below!

If you’ve ever skied somewhere such as Park City, you’ll know that getting lost is a real struggle among the 300+ trails available. Yet, on the other hand, too few trails means after a day or so boredom may set in, such as Aspen coming in with a mere 76 trails. Jackson Hole Mountain Resort offers a happy medium of 133 trails. Zip up, down, and all around, choose your favorite trails and repeat them, or explore a new trail every single run.

Ideal for ANY Skill Level

Some ski resorts fail to offer enough beginner level trails, others neglect their intermediate skiers, and some simply don’t offer a real challenge for the experts. This is another area where Jackson Hole Mountain Resort comes in really strong. There are ten beginner, 40 intermediate, and 50 expert trails! Aspen, for example, has no beginner trails. If this is your first time skiing, JHMR also offers a world-class ski school, or choose Snow King Mountain, closer to town, to get your start.

Jackson Hole is All About That Vertical Drop

Any speed junkies out there? Yeah, we thought so! If finding steep slopes and whizzing down as fast as possible your cup of tea, then once again Jackson Hole is the home for you with 4,139 feet of vertical drop. Each of the alternatives above is hanging out in the 3,000 feet range. Let’s put it this way – there isn’t a single ski resort in North America with a chute as legendary as Corbet’s Couloir in Jackson Hole. This is a slope where skiers go for the ultimate adrenaline rush, and the prove their mettle. Named after Barry Corbet, a mountaineer who spotted the narrow crease of snow in 1960. If this sounds outside of your skill level, not to worry, you can sit back, relax, and enjoy the show as you ride the tram right past it on the way to the top of the mountain for other trails!

We’re Number One, According to Forbes

Not to toot our own horn or anything, but Forbes named Jackson Hole Mountain Resort as the #1 Ski Resort in North America in 2017. According to Forbes, even without copious amounts of snowfall, Jackson Hole still has the best fall lines and terrain. The addition of the Teton Lift took the resort to a whole new level by accessing terrain much less skied prior and magnificent views of the Tetons.

There’s a reason Jackson Hole has been steadily rising in popularity over the past 15 years. Come ski or snowboard with us regardless of your skill level! Whether you’re just starting out your ski journey, or have qualified for the Olympics, everyone leaves Jackson Hole completely satisfied! 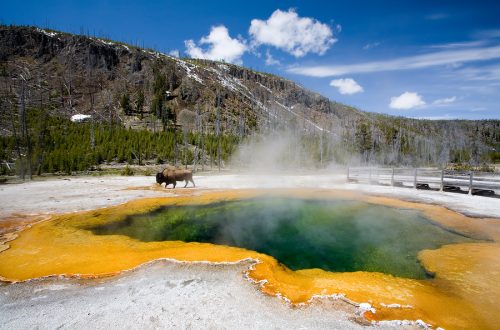